On Sunday, I took part in the Suie Classic, an 87km ride that’s part of the Great Inverurie Bike Ride (GIBR). The GIBR’s been on the go for a number of years, as a 25 mile ride – I’ve done it a number of times as part of a work team or with friends. Last year they introduced the 54 mile Suie Classic, which adds a loop of 30-odd miles to the 25 mile route. The loop follows the river Don through the Lord’s Throat, then climbs over Suie hill, and returns through Auchleven, then back up the Lord’s Throat to Monymusk and on to Inverurie.

Groups of about 20 riders were started at 5 minute intervals – I started in the second group, and avoided the temptation to fly up the road with the lead riders! I rode with a couple of others for the first few miles and noticed a creak in my bike – for a start I wasn’t sure if it was my bike or one of the others in the group. Anyway, it didn’t sound anything major, so I just carried on – I’d have a similar creak in Lanzarote a year-or-two back and it turned out to be some relatively minor.

I took it fairly easy for the first 20 minutes-or-so, riding with a group of others. Then, as we started the short climb into Chapel of Garioch I rode away from them. Apart from one or two riders I passed on the climb from Chapel of Garioch to Blairdaff, I was pretty much alone until I turned onto the road through the Lord’s Throat. It’s quite scenic along here, following the river Don. There’s a couple of short, sharp climbs here, where I passed another couple of riders, not catching anyone else until I turned onto the Suie Road.

It’s about 10km from the turn off to the summit of Suie, mostly a gradual climb until the last 2km-or-so, where the gradient is between 8-10%. The road curves through the trees at the top, and, since I’d never been across this hill before, I had no idea how much further it was to the top. It was a great relief to see the photographer at the side of the road, as I knew this was the top. There was a drinks station setup in the car park at the top, but I decided to keep going, especially since it had started to rain on the climb.

The descent from Suie was pretty steep – 12% in some parts with a couple of sharp turns. My brakes were squealing a bit and I was at the limit of my stopping power on some parts – a good case for disc brakes! The descent shallows out a bit then descends to Auchleven, when there’s another climb of about 1-1.5km at 7-8% before completing the loop back to the Lord’s Throat road.

Coming back alongside the Don, there were a number of people having picnics and paddling in the river – it was quite tempting to stop and join them, but I knew I’d struggle to get going again. Just before joining the remainder of 25 mile route, I stopped to help another cyclist with a puncture – he’d fitted a new tube, but couldn’t quite get the final part of the tyre bead on. We put a bit more CO2 in the tube and the type popped back onto the rim.

Once back on the 25 mile route, there was a loop round Monymusk – there were a couple of short climb, and the road surface was noticeably worse than the rest of the course. Once back in Monymusk, I stopped to refill my water bottles and was caught by puncture guy, who again thanked me for the help. Cakes and tea were available in the local hall, but, whilst tempted, I decided to press on for the finish.

The final part of the course runs back to Inverurie through Blairdaff and Burnervie, before passing Inverurie hospital to the finish. This section has a few short climbs, made all the harder by being at the end of the ride. On this section I passed a few other riders, mostly from the 25 mile ride and a couple of family groups from the 13 mile option – it’s good to see families out as a group enjoying cycling.

Final time for the route was 3:48:00, with a moving time of 3:45:12, 79th out of 170 finishers. I’d hoped for 3:30-ish but considering I haven’t had many long rides leading up to this event, I’m happy with that. I’ll certainly consider doing this event again, if I can manage to get in some more long training rides before it. 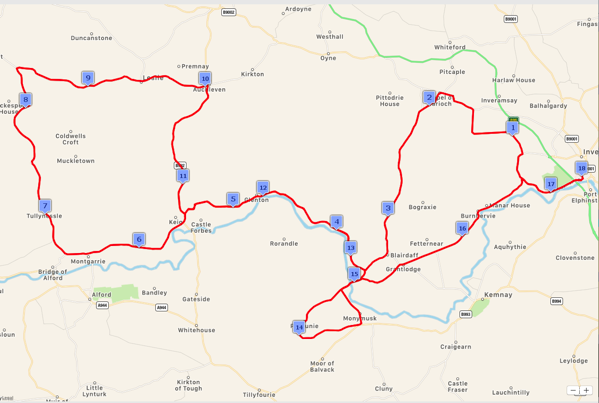