My bike is a fairly old Giant TCR1, which I bought back in 1998. At the time, the design was fairly revolutionary, being the first ‘compact’ bike frame, designed by Mike Burrows, who also designed Chris Boardman’s 1992 Olympic Gold Medal winning Lotus Type 108 ‘Superbike’.

Over the years, I’ve upgraded quite a lot of the components on the bike, starting with the wheels (the original TCR came with Burrows’ design of flat-bladed carbon spoked wheels, which, while they looked nice, were quite heavy and not that aerodynamic.)

This Christmas, I upgraded the gear shifters and brakes to Ultegra 6700, moving from 9-speed to 10-speed. I don’t expect that the extra gear will make much of a difference to me, but the existing shifters were the original 9-speed Ultegra 6400, and I’ve noticed a big difference in how ‘snappy’ the changing is with the new shifters. Also, the change to integrated gear change cables makes the front-end of the bike a lot tidier.

At the moment, the only original components from the TCR are the frame, forks, and seat post. Within the next six months, I’ll retire this bike to be my winter bike, and buy a new ‘good’ bike – perhaps a Canyon AL-Ultimate DI2. 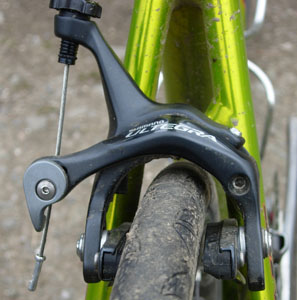 Performance cookies are used to understand and analyze the key performance indexes of the website which helps in delivering a better user experience for the visitors.

Analytical cookies are used to understand how visitors interact with the website. These cookies help provide information on metrics the number of visitors, bounce rate, traffic source, etc.

Advertisement cookies are used to provide visitors with relevant ads and marketing campaigns. These cookies track visitors across websites and collect information to provide customized ads.

Other uncategorized cookies are those that are being analyzed and have not been classified into a category as yet.

SAVE & ACCEPT
Share this ArticleLike this article? Email it to a friend!
Email sent!