The Turriff triathlon is a close as I’ve got to a local event. It’s about 6 or 7 miles from my house, based at the local sports centre I use for swimming. I’ve done the event a few times, the first being in 1997. There’s the choice of a Short (400m/20k/3k) or a Spring (760m/20k/5k) events. I’d opted for the Short, given my lack of swim practice recently. There were about 120-130 entrants speard over both events.

I was in the second heat, with two others in my lane. I’d put my swim time as 10 minutes for 400m in the entry form. Once the swim got going, the water was quite choppy. My technique started to get a bit sloppy after half way and I started taking a brief rest at the end of each length. I was passed by the other two in my lane. I completely lost count of the distance I’d swam and was surprised to see the lap counter indicating to the other two in my lane that they were on their last lap – I’d thought we still have further to go. Getting out of the pool at the deep end was a bit of a struggle – there’s no ledge to stand on and launch yourself up like there is in some other pools.

The transition area is about 300 m from the swimming pool, through an underpass on the main road. I’d left my trainers, bike top and gloves at the exit of the pool, put them on then ran to the bike. I also accidently picked up someone’s googles at the exit, thinking they were mine, until I realised that mine were around my neck – I passed them to the organiser in transition. Putting on my bike shoes took too long – I’d forgotten to leave the straps open for the quick entry – that was the whole point of buying tri-specific shoes! I’d also decide to put on socks, as I’ve had problems with blisters before when racing without them, which took a bit more time. The run out of transition is a short up hill to the mount line – fun in cycling shoes.

The bike starts almost immediately with a hill. It’s quite steep for first couple of kms, then levels off to a more undulating climb to the 7 kms point. I’d kept my effort steady up to this point and I’d passed one other competitor – I’d had to hang back before passing as the road was a little too twisted to be able to see any oncoming traffic.

After the right turn at 7kms, the road climbs for another 1-1.5km. On this section, I passed another entrant, and spotted a couple more, further up the climb. From the top of the climb it was a fast downhill with a couple of tight turns and a quite rough road surface. The course then turns onto the main Huntly road, and continue back into Turriff.  This section is mostly downhill with a couple of short climbs. It was on one of these climbs that I managed to pass another rider, and one more one the downhill section.  Coming back down to the transition, I had cramp in right calf down the last hill. The run from the dismount line to the bike racks was downhill, so running this in cycling shoes didn’t help!

The run section is an out-and-back along the last few km of the bike route. It’s a climb for about 750 metres, then level out. It’s on pavement for the first 1.25 km or so, then on the road to the turnaround.

Once off the bike, I couldn’t get into a good stride pattern, and could only take only short steps. I Stopped to walk for 1 minute at 1 km point and again at 2 km, then ran back to finish. 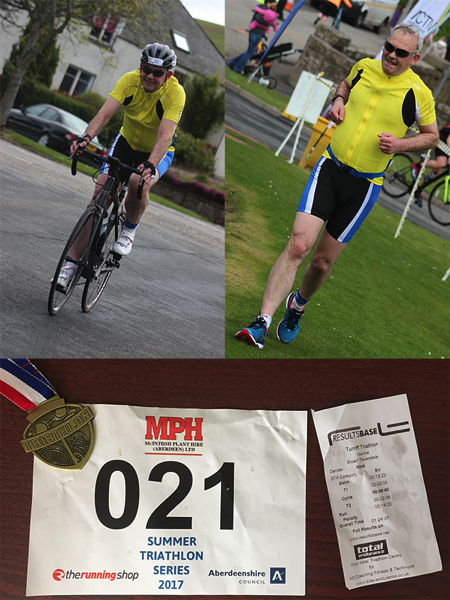 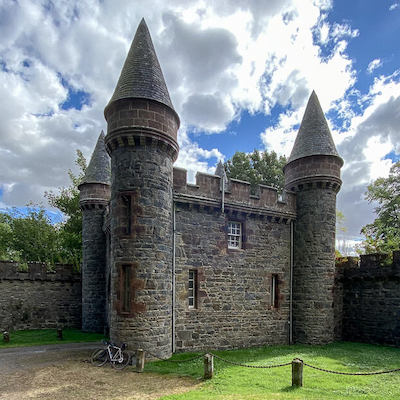 The North Lodge is one of the original entrance lodges to Fyvie Estate and was original the main entrance for visitors from the North.

Coming the day after the KoM sportive, I knew this race wasn’t going to produce any PBs! I’ve run this race many times since my first attempt in 1991. It’s route has changed since the early years, and it’s now based around the beach area of Aberdeen. The route takes the runners from the Beach…

It’s been a bit quiet here recently, mainly as I didn’t race for all of 2016 – this wasn’t really intentional, just how things worked out. I was too late signing up for some races, and others were cancelled for this year. I’ve still biked and ran as much as ever, and probably swam the…