At start of year, my nephew, Ben, mentioned he was running Loch Ness marathon. I Decided to join him, as I’d always planned a marathon at some point, and this seemed the ideal opportunity. At the time, it seemed like a long way off, not until September.

Coming up to the event, my training had gone OK –  I’d had a couple of 10 – 12 mile runs about 6-7 weeks out, but I managed to get sick for a couple of weeks shortly after that. My longest run was 16 miles a week before the race.

I’d booked accommodation in the Premier Inn in Inverness, as it was only a short walk from the race village for registration and transport to the start. On the Saturday night we met up with my nephew, brother and mum for a beer and something to eat. The restaurants were pretty busy and it took us a while to find one with a table available. After food, it was back to the hotel for an early night.

Race morning started at 5:30 for a breakfast of cornflakes. From the hotel, it was a short walk to the pick-up point for the race. I met up with my nephew and from there, we were bussed to the start of the race (about an hour’s travel) at the south end of Loch Ness (opposite Invermoriston). We left the busses and walked a short distance to the start area. The start was on an exposed moor and it was cold windy and horizontal rain. We were glad of the bin bags we’d brought for insulation! On the plus side, there were plenty of portaloos for the 2500 starters.

We were piped off at the start by a school pipe band. The route is downhill for first 5-or-so miles, which meant we were less exposed to wind and rain as the road dropped down to the loch side. I ran alongside Ben for the first couple of miles, slightly ahead at times and slightly behind at times. I lost sight of him after about 6 miles and didn’t know if he was ahead or behind.  Just after the 6 mile point, there was a large-ish hill where I walked up it. From then on, the route is undulating. I went through the half-marathon point at 13.1 miles in 2:20, and still felt OK. However, after 17 miles the wheels came off and I was reduced to walk/jog. At least at that point the remaining miles were in single figures. With 6-or-so miles to go there’s a long hill which seems to go on forever. After that point, we were back on the outskirts of Inverness with only a short-ish distance to go. The final part of the course follows the river Ness past a number of pubs and hotels, then crosses the river and follows the other bank back to finish in the race village at Bught Park. I managed to run most of the way back from the bridge and finished in a time of 5:17:01, a bit longer than I’d hoped, but not too back considering the training I’d done. My nephew, Ben, finished almost an hour behind me in 6:15:33.

Post-race, we heading into Inverness for beers and pizza (and a lot of garlic bread!) at the Black Isle Bar. 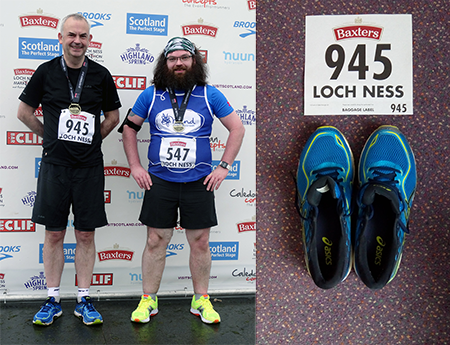