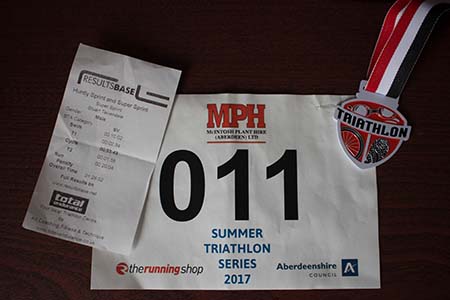 Last weekend, I competed in the Huntly Triathlon, another event in the MPH-sponsored Aberdeenshire Council Triathlon Series. It’s based at Gordon Schools & Huntly swimming pool, about 45 minutes’ drive from my home.

I’d seeded myself with a slower swim time that at the Turriff race, with the hope of being in a lane with swimmers of a more comparable speed to myself. Luckily, this seemed to by the case and I ended up swimming with someone who was more-or-less the same speed as me – we completed the swim a few seconds apart, although I took a little longed exiting the pool as I moved across a lane-or-two to use the ladder.

Once out into the transition area (there was a run from the back door of the pool to the car park where the transition was setup). I had a fairly quick (for me – still putting on socks) transition, and ran with my bike up to the mount/dismount line.

The first part of the bike runs through the town of Huntly and out onto the country roads. The section through the streets is quite twisty with some sharp corners. I was a little surprised to be passed by another cyclist on one of the sharp, blind corners! However, it was early in the bike leg, so I didn’t bother to chase him down yet. Once out of the town, the bike runs along the A96 main road for a short while before turning onto quieter, more rural roads. The route runs through the surrounding farming countryside, before heading in to the village of Rothiemay. Shortly before the turn-off for the village, I managed to pass the cyclist who’d passed me in the corners in Huntly.

The route to Rothiemay is fairly flat with a few undulations and a final drop into bridge before entering the village itself. Once in Rothiemay, the route turns back towards Huntly, following the River Deveron. From this point, the road climbs gently, before a drop back into Huntly. The course turns back into Huntly, and returns to the pool via a couple of narrow streets with a couple of tight corners to watch out for.

Overall, I was happy with my race – certainly, I have a better swim that at Turriff, and felt stronger on the bike. The run still let me down a bit, though.

The King of the Mountain Sportive is organised by a local cycling club, Deeside Thistle. There are three options; 100 miles, 100 km or 25 miles. I took the 100 km option. This would be the furthest I’d ridden for a long time, certain since my days of living in the Netherlands in the early…

I’m just back from a couple of weeks training at Club la Santa in Lanzarote.  This is the 8th or 9th time I’ve been to Club la Santa. It’s a great place for a training camp at this time of year – the weather’s generally in the 18 – 23 degree range, although it can…

Another training camp is over. We had a fantastic two weeks at Club la Santa. The first week was the Spring Triathlon camp with Joe Beer and Dan Bullock, and the second was intented to be a bit of a holiday, but ended up being a training week as well, albeit with a sight-seeing trip to…