Recently, Wahoo released an update to its ELEMNT ROAM GPS head unit. I’ve been an ELEMNT ROAM user for quite a while, and I was keen to see what had changed. However, based on the initial reviews, I was fairly unimpressed by the update. It looked the same, just had more storage & a better screen (64 colours instead of 16), and all the new software features would be available on my older V1 ELEMNT ROAM.

However, I recently got a look at the new version from one of my riding buddies and changed my opinion a bit.

For me, this is a major improvement. On my V1 model, the main buttons are slightly recessed below the level of the body. On the V2 model, they’re slightly raised up. Most of the time, the V1 buttons are completely fine. However, for the part of the year when I’m wearing full-finger gloves, the buttons are tricky to operate. It’s almost like having fingers that are too wide to get a good press! The V2 buttons are a lot easier to use with gloves and, given that I live in Scotland, I’m wearing full gloves for quite a bit of the year!

USB-C is a nice addition – Garmin’s dragged its heels on moving to this, although I think the latest Edge 1040 has it now. I dream of the day that everything I own is USB-C, and no more hunting for micro-B, mini-B and all the other combinations of USB plugs!

The new unit’s now got a dual-frequency GNSS chip from Sony, similar to the ones in the latest Garmin units. This will apparently improve GPS accuracy in marginal conditions, like areas with tall buildings. Given that I cycle mostly in the open countryside, I wouldn’t expect this to have much of an impact on me. DCRainmaker’s review takes deep dive on the GPS accuracy, and it’s worth a read if this is important to you.

The storage is increased from 4GB to 32GB – this seems to be mostly for maps, with the unit having maps for the entire world, instead of having to download for individual countries or areas. Unless you’re traveling a lot, this won’t have much of an impact on you.

Along with the hardware, Wahoo has also released updates to their phone app and the software for the older V1 ELEMNT, so, feature-wise, there doesn’t appear to be anything on the V2 that’s not available on the V1.

This seems to be a solid evolution of the ELEMNT. The better GPS performance, increased storage and improved screen were needed to bring it in line with the latest offerings from Garmin and Hammerhead. For me, however, it’s not a compelling upgrade, even with the improved buttons! 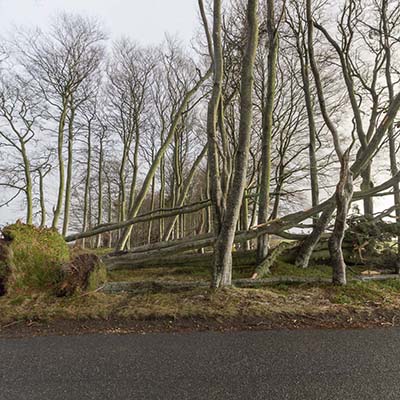 At the start of last year, I converted my Planet-X Tempest to a 1x setup. I was lucky enough to get hold of a second-hand set of Force AXS levers and disc brakes, and I paired these with an Eagle XX1 rear mech for a ‘Mullet’ setup. Gérard Vroomen, ex of Cervelo and now at…